Get designing! Create your own made to measure rug or carpet runner now with Make Me A Rug

Mid-Century Modern design describes architecture, furniture and graphic design from the middle of the twentieth century (roughly from the mid-thirties to early- seventies). That’s quite a few decades and this style can mean different things to different people.

Believe it or not it started out as a minimalist movement before it cheerily swept through the suburbs in the forties and fifties with a frenzy of post-war home-making. Whatever your take, mid-century modern continues to capture our popular imagination. 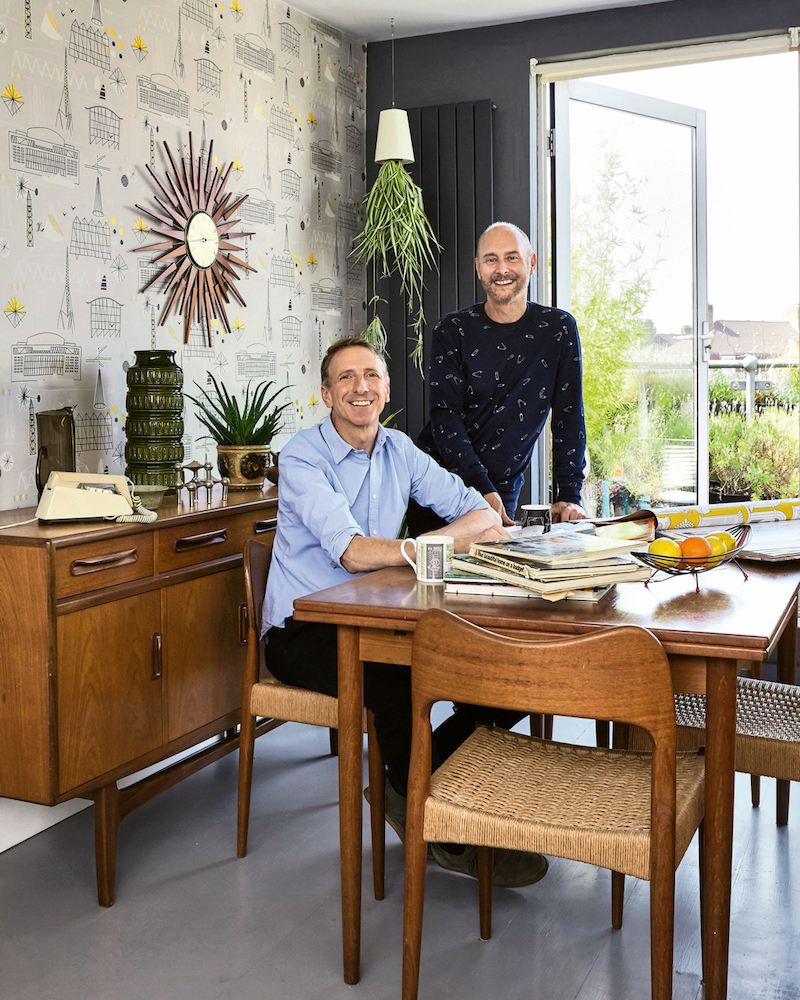 On one level it’s an attractive, accessible, versatile style that can be easily mixed and matched into interior schemes. You can pepper pieces in without having to rethink the décor of the whole room. It’s great for small urban spaces or open-plan living and is now used in a more eclectic way. Others may invest in beautifully restored or iconic pieces by legendary designers such as Charles and Ray Eames, Robin and Lucienne Day and Florence Knoll. Here the ‘less is more’ design philosophy applies.

There’s a lot of interior components to consider and a bewildering set of decisions to make – but the guiding principles are simple, informal, fuss-free with functional goods and the honest use of materials.

If you are curious about this design movement or you want to find out more, then look no further for mid-century personal insights and inspiration to Mini Moderns. Founders Keith Stephenson and Mark Hampshire have just launched a new book called ‘MID-CENTURY MODERN LIVING: The Mini Moderns guide to pattern + style.’ 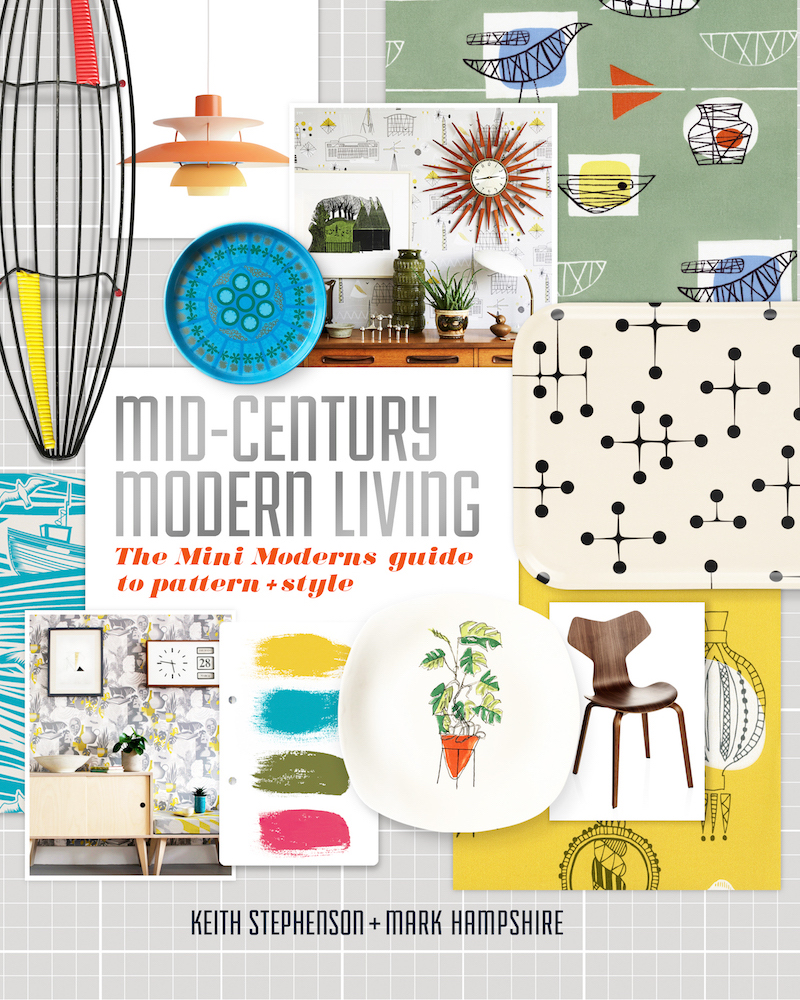 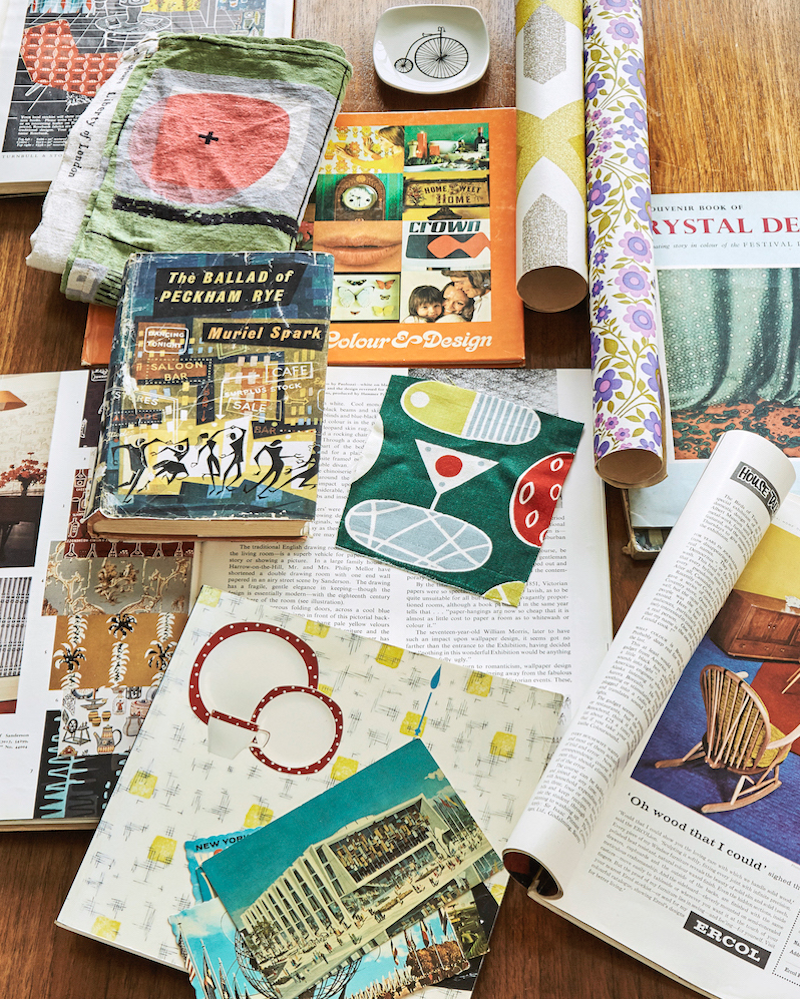 In their book MID-CENTURY MODERN LIVING Keith Stephenson and Mark Hampshire share their design influences with as they say the ‘express purpose of demonstrating how wide the net of the mid-century design hunter may be cast.’ From illustrated books and record covers to favourite films.

There are also quite a few Mini Moderns mantras in this book. The ones we love are:

BUILD YOUR INTERIOR AROUND YOUR PASSIONS. Start with your collections and cherished possessions

EMBRACE PATTERN AND COLOUR. Don’t be scared, it won’t bite.

Their studio townhouse is a live/work space that balances functionality with comfort.

They say:  “the space acts as a showcase for our range of wallpapers and fabrics and therefore out style is rooted in our mid-century inspired designs. Richly patterned zones are punctuated with plenty of white space, so the whole are feels fresh and uplifting.”

Keith and Mark are also Alternative Rug Stars and chose Quirky B Honeycomb Moss rug to use in their own home and this features in this style bible. 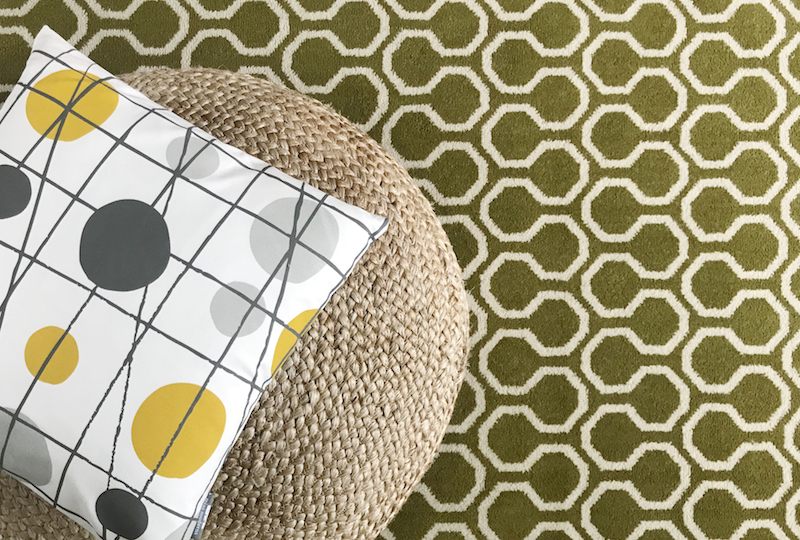 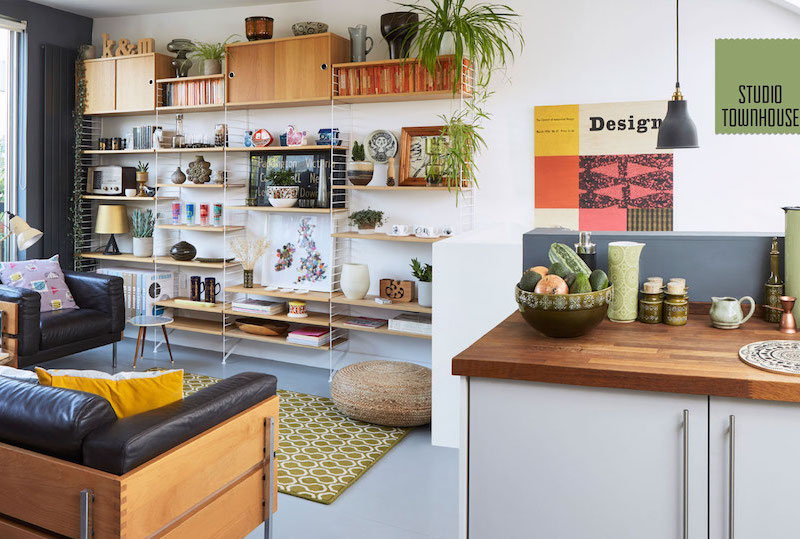 ‘We made an early decision to start collecting String shelving and this now features in most rooms in the house.’ 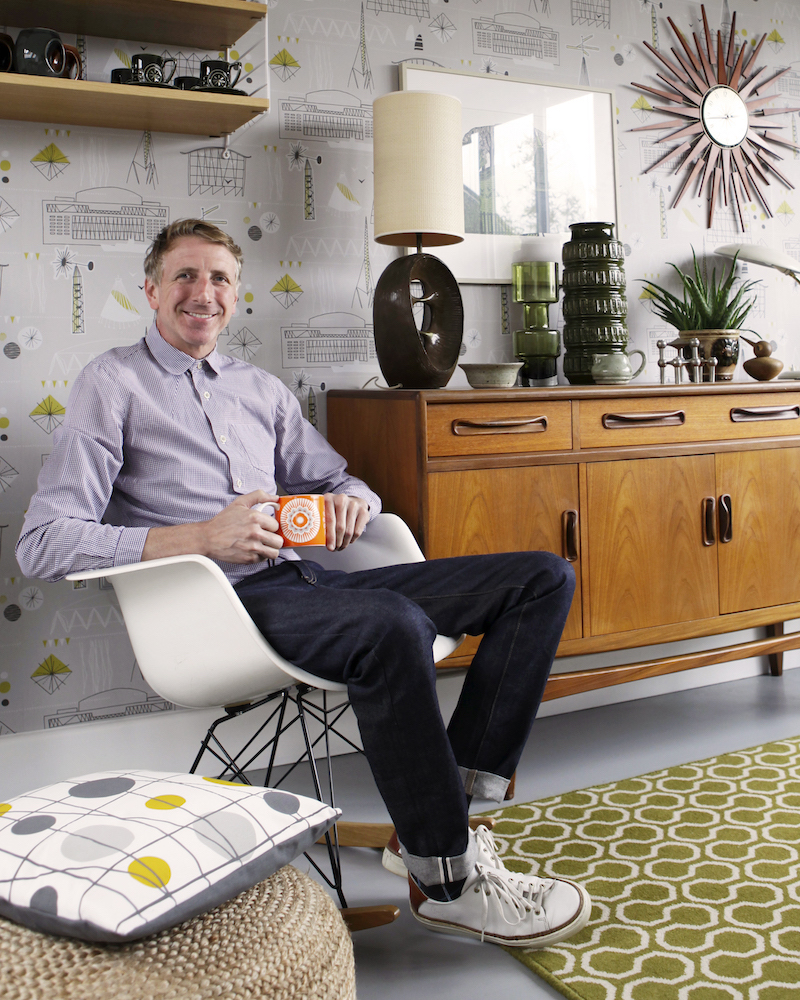 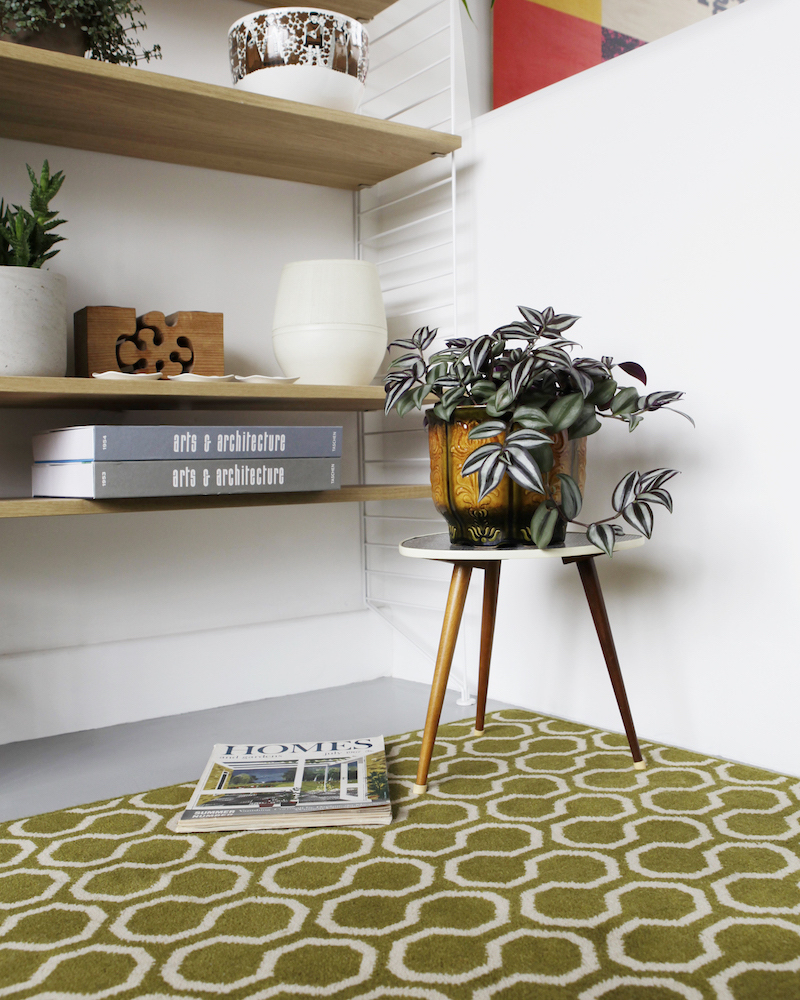 Keith and Mark’s Quirky B Honeycomb Moss rug designed with Alternative Flooring’s Make Me A Rug.

Keith and Mark say that, ‘Furniture of this period usually comes on spindly legs, it allows more of the floor to be seen, which keeps a room feeling spacious and uncluttered.’ 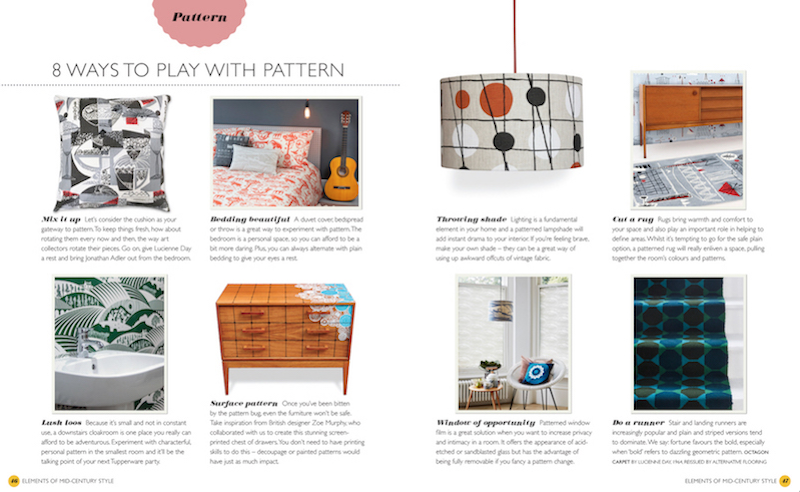 There are also tips on ways to play with pattern which includes our Authentic Lucienne collection for stair and runners.  They say that; ‘fortune favours the bold, especially when bold refers to dazzling geometric pattern.’ 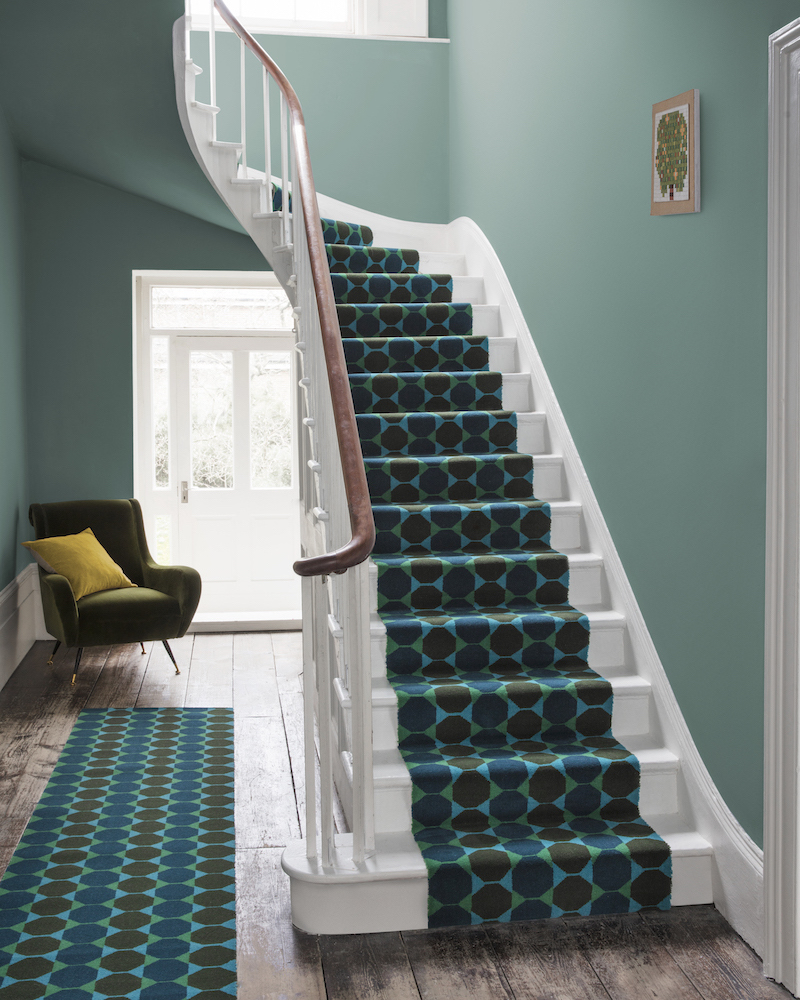 Post-war Britain saw the rise of a young Lucienne Day whose work was amongst that featured in the Festival of Britain. She forged her name in the textile and design industry by conveying the optimistic national mood through her modernist patterns, which came to define mid-century print design.

Alternative Flooring and The Robin and Lucienne Day Foundation have recently worked together to launch the Authentic Lucienne carpet runner collection – a celebration of archive carpet designs by one of Britain’s best-loved 20th century designers.

In 1964 Lucienne Day created a collection of bold geometric designs for the Wilton Royal ‘Architects’ Nova’ range. Developed for the needs of architects, these carpets were designed to complement the spatial qualities of modern interiors.

Two of these designs, Octagon and Squares and Diamonds stand out for their vibrant colourways and have now been reproduced and expertly woven on original looms by Alternative Flooring. 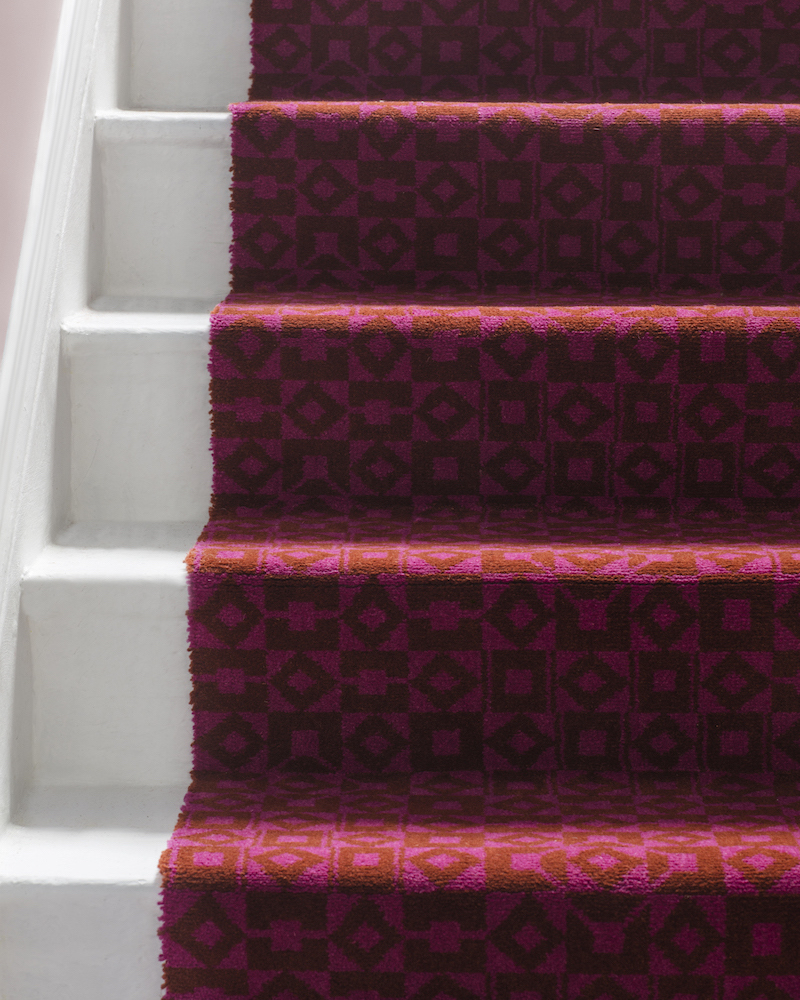 Paula Day comments: ‘I am absolutely thrilled that these wonderful little-known designs are now back in production, more than fifty years after my mother created them. The patterns and colours have sprung back to life looking as fresh and contemporary as if they’d been designed yesterday.’

Whether you want to go overboard and use mid-century modern design throughout your home or think variety is the spice of life with a blend of vintage pieces from a variety of periods, this style undoubtedly brightens up our world and definitely is here to stay.

Inspired? Mid-Century Modern Living is a vibrant read, jam-packed with information, inspiration and stunning photos by Jan Baldwin. You’ll even find their top ten films for authentic design inspiration, music playlists and food and drink suggestions to really get you in the mood.

Well, we have a signed copy of Keith and Mark’s book to give away! Just tell us why you love mid-century modern style and we will select the winner with the most original answer. Give your answer here, on our Facebook post. 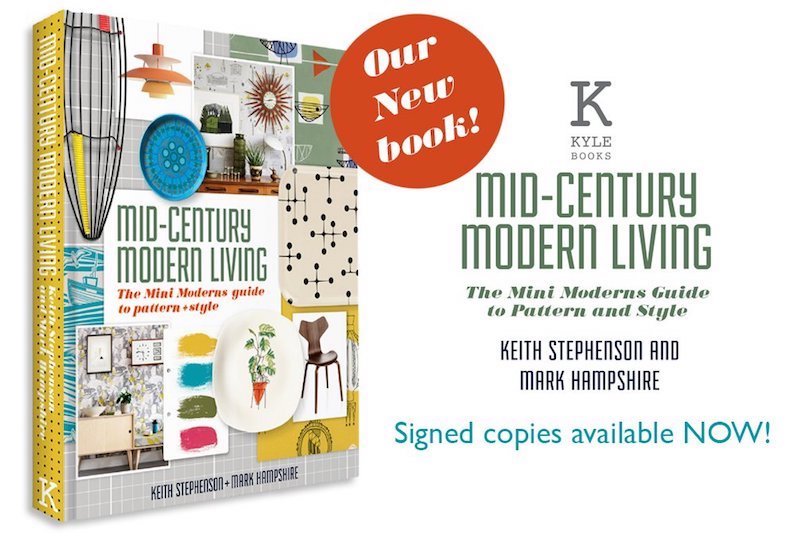 ‘We’re more interested in using the spirit of mid-century designs as a springboard for a contemporary style that’s firmly rooted in 21st century living. Let’s call it Mini Modernism.’  says Keith and Mark.

Find out more about Mini Moderns, and The Robin and Lucienne Day Foundation.

Drama for the home with Divine Savages